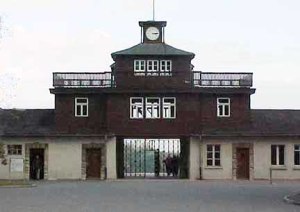 Saying the Wrong thing these days can get you in a lot of trouble. To be specific, the Tyranny of Political Correctness is running rampant, denying the freedom of thought, expression, and speech. It is the same tyranny rooted in Marxism and which also began in Germany just before the Nazi reign of terror. In fact it was a precursor to the hijacking of the German Conscience in the late 1930’s-ending in the deaths of millions worldwide.

Let me state up front that I am not a Conspiracy Theorist, but I have experienced up close the insidious nature and end result of government sponsored political correctness. In this, the first of two blogs on this subject, I want to take you with me to Buchenwald Concentration Camp in Eastern Germany. It is April 1995 and I, along with 5,000 ex-prisoners, and 38 former American liberators, were part of a 50 year celebration anniversary of the liberation of Buchenwald. Please excuse the length of this blog, but I want you to first grasp the end result of what happens when a nation’s Conscience is silenced by tyranny. Therefore, I am re posting this article which I wrote several years ago.

Jedem das Seine-“Everyone Gets What He Deserves”

It’s as plain as the nose on your face, or so some psychologists say. Smells can bring to mind memories long since forgotten. In fact, various scents have a greater ability to bring about remembrance than seeing an image or hearing a voice. I had no idea how the truth of those words would soon impact my life.

I will never forget the date nor the bone chilling cold that swept across the now barren parade grounds in the early morning hours of April 18th, 1995. As we entered the old barracks with the towering brick smoke stack, it was no longer 1995, but the specter of World War II and the nightmare that was Hitler’s death camp lay before me. There, rising just several yards in front of me, stood four red brick ovens with small black doors that represented Hitler’s “final solution” in Buchenwald for 60,000 Jews, Christians, and other political prisoners. What I was about to experience the next few days, would impact my heart and understanding of the Holocaust forever.

Myself and a friend, accompanied a former Jewish prisoner at Buchenwald, to Weimer, Germany for the 50th anniversary of the death camp’s liberation by American soldiers in April 1945. Buchenwald was located just a few kilometers north of Weimer on a beautiful plateau that overlooked the village below. It was out of our love and respect for our friend Joe, and our desire to share our faith with anyone who would listen, that brought us on this epic journey.

Joe’s experience at Buchenwald and several other interment camps, plus a forced march that had taken the lives of 24,000 fellow prisoners, had deeply scarred his understanding of God as his Heavenly Father. Though he had survived those horrors, the years which followed were a living nightmare. Now we were at the place of his torment, and each visual reminder only added to the internal pain buried deep within.

As Joe and I stood on the parade grounds and viewed where the prisoner’s barracks once stood, he began to tell me his story. He began with the moment he had been taken off the train and walked through the camp’s heavy iron gates engrained with the words, “Jedem das sceine,” or Everyone gets what he deserves.

Joe’s duties included daily collection of dead bodies from the barracks after roll call at 4:00 am and then taking them to the crematorium for disposal. Ironically, standing before us was an old cart identical to the one that Joe had used. He had often thought how lucky were those who died on their beds of straw, because no one could rob them any longer of their dignity and respect.

Early in the morning, just before the ceremony was to begin, Joe and I went back to place a bouquet of flowers in front of the ovens as a tribute to his comrades and friends. It would be a walk that I would not soon forget. As we approached an area overgrown with brush, Joe stopped and stared. In the midst of the undergrowth, was a huge steel cage, big enough to house a large animal. With trembling lips, Joe muttered, ” There’s where dey kept dem damn dogs!” Then, he pulled back his coat sleeve revealing a gaping hole in his forearm. One morning, just for sport, a prison guard had released a German Shepherd from the cage and told him to attack Joe. The damage had been extensive.

A short distance away was a small amphitheater . In chilling detail, Joe explained its purpose. Sunday mornings, after German officers had attended the official government church, they would gather in the amphitheater at Buchenwald , along with their families and enjoy an afternoon of entertainment at the prisoner’s expense. Just behind the arena, stood several larger cages, and in those cages, were kept giant Russian brown bears, towering nearly eight feet tall. The entertainment was simple- each family was allowed to pick one prisoner to be placed in the center and torn apart by the bears. Nailed to a nearby tree, was a picture of of one of the camp’s bears whose large body and frightening face revealed the terror likely felt by the prisoner’s before their brutal deaths. In addition, each officer’s child was allowed to pick out a prisoner for hanging on the gallows nearby.

Just before we entered the crematorium, a man carrying a Ukrainian flag approached Joe, and both men embraced and began to weep. Fifty years before, they had been prisoners at Buchenwald in the very same barracks and had experienced the horrors together. Now, as free men, both were seeking that same freedom emotionally and spiritually,

Then, another man approached us and gestured towards the giant red chimney. His words sent chills down my spine. He pointed towards the metal ladder attached to the chimney and related how each morning the camp guards climbed the ladder carrying a large basket. At the very top, using a large ladle like spoon, they would scrape the chimney walls collecting human fat that had collected over night. The fat was then placed on moldy bread and fed to the prisoners. I thought to myself– such brutality only resonates from minds that have been numbed to the truth espousing only the party line.

As we entered the crematorium, the silence was deafening; save for Joe’s murmurings.. It was his first trip back to the nightmare that had robbed him of so much of his youth. Now on this visit, Joe was addressing the demons that had kept him in bondage for so many years. As I walked around the large dark room, I wished that the walls could reveal the hidden secrets of of those brave souls who had perished in Hitler’s ovens. Then it happened. I will never forget the smell. I first convinced myself that it was my mind and emotions playing a cruel trick on me. I took several breaths believing that each would dispel what I was thinking and smelling. Suddenly, the door opened and in walked a man that we had talked with the night before. Jim was one of 38 American veterans who had been invited for the anniversary. He had been one of the first soldiers through the iron gates of Buchenwald during the camp’s liberation– an experience that had haunted him ever since. In the early morning fog, directly in front of him, lay a pit approximately 40 feet across and 20 feet deep filled with emaciated bodies, many dead but some still moving. The night before, Jim had shared his story with us concerning the trauma of that experience. He had been so overwhelmed that neither his parents, nor his wife, had ever known the details. In a small restaurant, in downtown Weimer, Jim released his burden and pain and asked Christ into his life. It was Jim’s time and one Divine Appointment had allowed us to meet.

I walked over to Jim and placed my arm on his shoulder, as tears streamed down his face. He explained that it wasn’t returning to the crematorium that, after so many years, that upset him as much as the smell– the very same smell that he remembered 50 years before. He said that the ovens had been filled with burning bodies that fateful morning and the smell of burning flesh was so strong that he nearly fainted. In some bizarre way, I was identifying with his feelings, because I too was experiencing the same thing.

I cannot say that I fully understand what happened that cold April morning in Buchenwald. But I will add that the smell stayed with me for months after returning home. And even today, at family cookouts, I have a hard time with the smells.

Now, years later, as I look back over my experiences at Buchenwald, several thoughts come to mind. We were, first of all, ambassadors for Christ before Joe. Secondly, through a Divine Appointment, an American soldier was set free from 50 years of emotional torture. But thirdly–we gained a  new understanding of what can take place when a whole nation loses it’s understanding of truth and righteousness. We saw first hand what happens when the conscience of a nation is silenced by the roar of the crowd and the loss of self expression, as well as the ability to think for oneself and express individual ideas.

The killing chambers of Buchenwald will forever make me a witness for the innocent who died there, because for a few short days, I relived their story! Today, from Hitler’s ovens, to the slave labor camps in North Korea and China, to the holocaust happening presently in the Middle East, and to every other place in the world where freedom of speech is being silenced through an aberration called Political Correctness, it is imperative that we stand up for our God given rights so that the German atrocity of Hitler’s Holocaust may never happen again. Remember–we do get what we deserve,and apathy, indifference, or ignorance can never be an excuse!

In 1952, Presidential candidate Adlai Stevenson spoke these words. ” A free society, is a society where it’s safe to be unpopular.” Political Correctness is quickly eroding that premise. My next blog will deal directly with the nature of political correctness, and it’s danger to our personal freedom.

If you would like to get my blog automatically, just place your E-mail address in the location listed for your address Thank You.  .